Whole Lotta Celebratin’ Goin’ On: 85 Years Of The Killer 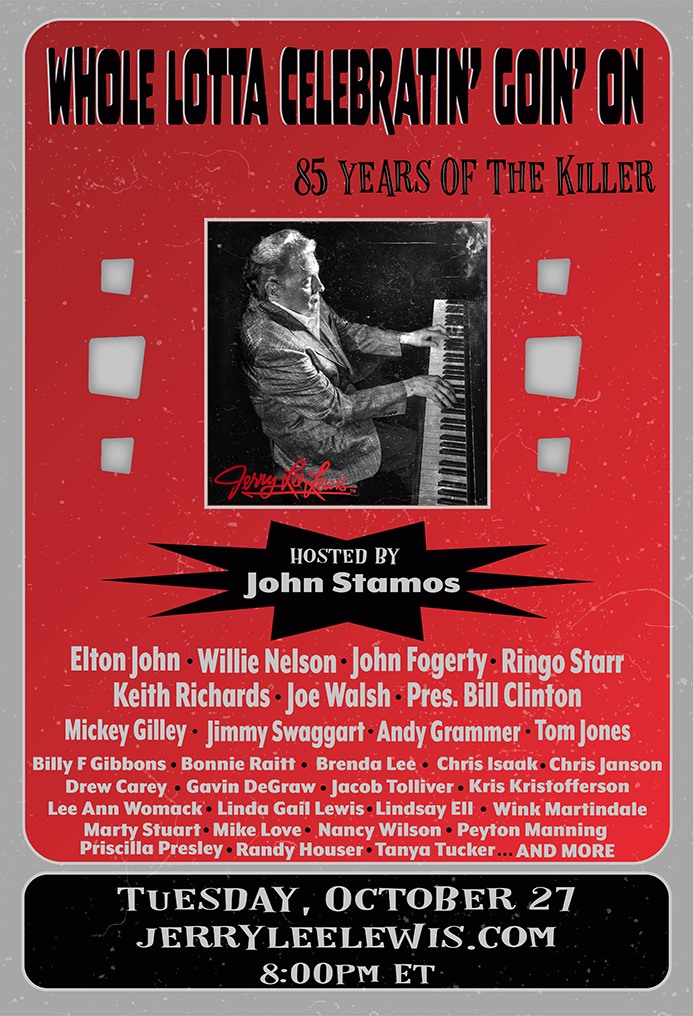 MEMPHIS, Tenn. (October 20, 2020) – Announced last week, a star-studded event will be held to celebrate Jerry Lee Lewis’ 85th Birthday featuring some of the biggest names in music, movies, sports, television and politics. The virtual livestream, hosted by actor John Stamos, has added Ringo Starr, Keith Richards, John Fogerty, Andy Grammer, Kris Kristofferson, Peyton Manning and more for performances and well wishes for the “Last Man Standing” and founding father of Rock n’ Roll. There will be special appearances from Jerry Lee Lewis himself and he will interact with fans via the live chat.

Whole Lotta Celebratin’ Goin’ On: 85 Years of The Killer will air on October 27 at 8pm ET/7pm CT via Jerry Lee Lewis’ official Facebook and YouTube channels and JerryLeeLewis.com. The event will benefit World Vision, a Christian organization working to help communities lift themselves out of poverty. For good.

Whole Lotta Celebratin’ Goin’ On: 85 Years of The Killer is being produced and directed by Zach Farnum / 117 Entertainment in association with Jeff Franklin and Tisha Fein.

About Jerry Lee Lewis
Jerry Lee Lewis is one of the all-time best singer-songwriters, musicians and pianists. He was born in 1935 to Mamie and Elmo Lewis of Ferriday, Louisiana. In November of ‘56 Jerry Lee made his way to Memphis, Tennessee where he would join Sun Records and launch hit records with “Crazy Arms,” “Whole Lotta Shakin,’”, and “Great Balls of Fire.” Jerry Lee, along with his friends Johnny Cash, Elvis Presley and Carl Perkins would become known as the Million Dollar Quartet and there is not any part of music that their influences haven’t touched. As a member of the Rock and Roll Hall of Fame’s very first class of inductees, “The Killer” holds numerous awards including a star on the Hollywood Walk of Fame, the Recording Academy’s Lifetime Achievement Award and countless other honors. He is truly rock n’ roll’s first great wildman, and shows no signs of stopping, touring around the globe and recording new music still today. Visit www.jerryleelewis.com to follow “The Killer.”